Never go back, they, say, but today I walked back to summers of 45 or 50 years ago. Our village is on a hilltop, with a steep wooded valley to the north. We called it ‘The Woods’ and half my childhood memories rest down there. Allowed to go with my friends once I’d hit seven, we’d be off for whole days in the summer. Sometimes we’d take jam sandwiches and an old pop bottle full of tap water, and once I got my dog he’d come too. My mix of friends would vary but it was very Famous Five.

I walked ‘backwards’ today, from my new house towards my old. I ignored the ‘Private Property’ sign with only a moment’s hesitation, as we’d done as kids and as the couple of dog walkers I met still clearly do. We would rarely go in the winter, as days are short up here, the main paths sticky with mud and the side-paths slippery with fallen leaves. Even in the summer, we’d come back with grubby hands and knees and Shep’s white paws and underparts were almost as black as the rest of him. We’d pick brambles out of his fur and he’d suffer to be cleaned up with old towels.

Playing explorers the woods was the closest we would come to living the life of the Swallows and Amazons. Sometimes we would be commandos behind enemy lines, giving us good excuse to hide from whoever came our way; a bully from school, an adult who might worry about what we were up to, or the legendary Warden who I think we saw maybe twice ever. Just like the Swallows we made maps and gave the places names. It was amusing to hear younger kids on the estate copying our names for this place or that when it became their turn to be seven years old and set free. Paedophiles hadn’t been invented back then of course, we just didn’t talk to strangers (and they were Nazi soldiers or Russian agents, anyway).

So on a cold December day with a weak afternoon sun, I came in through a little-used southern gate and got my bearings in an area of old sandstone quarries we seldom reached. Some had been too deep to climb into, and even looked dangerous to our most adventurous spirits. Coming out of the trees I came to the area we used to call The Rabbit, a stretch of bracken on a slope above the woods proper. Somewhere below was our usual objective, the Rock Pool. Its water used to be clear enough to drink just where it gushed from a spring. There had once, I recalled, been a path, but I had to climb gingerly down through the deep and wet leaves. If I found it, the pool had become little more than a set of muddy puddles choked by leaves and brambles. Beyond had been a place we called the Bracken Field, great for building dens, but I couldn’t see that at all. Nature is dynamic, and a lot can happen in 45 years.

Scrambling back up to The Rabbit I saw just one family heading towards the estates. The old path skirting the houses seemed to have gone, so I went down, deeper into the trees. On each trip we’d take a decision whether we had the hours needed to go deeper into the woods here, or stay high and go around the spring-heads to The Rabbit, or simply stay on the Tops so we didn’t have to go down The Big Hill. The sycamores and oaks seemed even taller now than I remembered, old friends meeting again, all finally grown up.

One stream cuts its way between the trees to ‘The Prehistoric Place’, a swampy area perfect for climbing across on fallen trunks and bathed in a magical green light; I wasn’t planning going anywhere near it in winter. So I turned towards ‘The Big Hill’, which no longer seemed as Big as it did when it was the last feature to climb at the end of a hot  day’s adventuring. 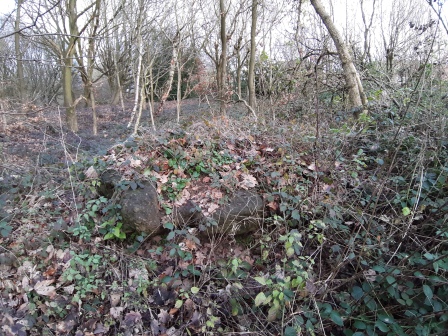 At the top I looked for ‘The Steps’, now only just visible beneath brambles. This had once been a bald hill crest with a mysterious set of concrete steps leading nowhere that made an excellent seat to survey the valley below. I was told it was a searchlight position from the war, but never knew the truth.

On the flat ground beyond The Steps some of the kids called The Tops, I struggled to get my bearings amid the silver birches. This used to be the most charmless area of the woods, pitted by half-filled quarries, and we’d pass quickly through if we had time to go deeper. Old paths once cut deep into the sandy soil here, such as we could kick up clouds in the summer to make explosions, but were now all gone. A huge quarry used to dominate this area, part-filled with rusting cars, old tyres and fridges. If you’ve read Stig of the Dump you’ll get the idea. It was also easy to get into, allowing us to hunt for dinosaur fossils in the exposed cliffs (which of course we never found) and even dig our own caveman cave. One burned-out car in particular had no doors, and a yawning sunroof, so we could become a spacecraft or B-17 crew; pilot, navigator, top gunner and sometimes even a radio man or tail gunner. The quarry is long gone, filled to its brim, capped with hardcore and allowed to be reclaimed by nature. Scrubby trees, bracken and brambles prove how quickly they can conceal the work of man.

After an hour, I came out by the in-road, the way we used to enter past a ‘Trespassers Will Be Prosecuted’ sign and an ineffective swing gate, both of which had vanished into memory. Across from the gate was a new estate, expanding the village way beyond that we’d known. Ten times the traffic now coursed the Lane that Mum used to caution me about crossing.

How on earth we survived childhood without plunging down a quarry face, drowning as we bridged a stream or suffering multiple injuries falling from a tree I never knew. Like superheroes we just brushed ourselves down, cleaned our wounds with spit, dabbed nettle stings with dock leaves and whirled our socks around our heads in the hope they would dry before we got home. I read that children don’t do this anymore; perhaps the world has become too busy. I was never a brave child, but this was where my spirit of adventure was born. Reading Tolkien took me back to those woods, its paths leading who knows where and a time when there was “less noise and more green”. The mystery of The Steps was my first clue that the ground hid secrets of the past, awakening perhaps an interest in archaeology. And of course we made up stories as we adventured, sometimes writing them down or adapting them for whatever essay the teachers set us. Those summer days still inspire me. Walking the Woods of my memory is not the same as walking The Woods that now are, but today I did both.

2 thoughts on “A Walk in the Woods”