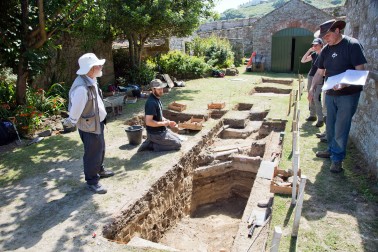 This August we returned to the Nunnery in Alderney, where our team last dug in 2013. This is Britain’s best preserved Roman small fort, continuing in use as medieval castle, Napoleonic barracks, German strongpoint, farm, hospital and holiday home. At some point in history it may even have been a nunnery, but we don’t know when.

We enjoyed 9 days of solid Alderney sunshine, only braving the rain to backfill on the last day. Nothing quite matches the experience of being on a dig with a dozen close friends. It is an intense and mindful experience. As director I thought of little else for two weeks other than the next layer we had to remove, the photographs needing taking, the record to complete. Our diggers needed to be fed at regular intervals too.

I actually ‘dug’ very little. In truth I scraped away at a few points to confirm the

relationship between layers and I emptied the grand total of three buckets. Surveying, recording and photography occupied much of the time. Although we were looking for the gateway of the Roman tower (and found it!) most of the objects we found were post-medieval as the site has been re-occupied, rebuilt and generally messed around with for 1700 years. The pic on the right has me with a surveying pole at the bottom of a pit which had been full of WW2-era rubbish, standing between a German faux bastion and a post-medieval building 6ft below the surface. Right behind me is the inner face of the Roman fort wall, revealed down to its base for the first time.

The site is in a glorious location, right on the sweeping beach of Longis Bay. We managed four swims after work when the tide was coming up not quite to lap the feet of the Nunnery’s fallen east wall. Afterwards, the evenings saw us enjoy Alderney hospitality at its best by sampling a different pub or restaurant each night. I put on more weight thanks to the food and wine than I lost perspiring on site! All good things must end and I’m back in the garret in Guernsey now, sweltering in the heat even though it is past nine o’clock. I have a great pile of finds record sheets, context record sheets, levels, photographs and two hours of video to work through before writing the dig up for publication. In many ways, my work has only just begun.

One thought on “Jason and the Archaeologists”