There have been over 100 novels set on the island of Guernsey. Most of them miss one of the key features of the island – its language. They are written for the main part by off-islanders, from Britain or most famously from America. Any novel set before 1950 must however confront the question of what language are our characters speaking?

Writing in dialect can be challenging, and reading dialect can be tiresome. I’ve put aside books because I’ve grown bored of fighting my way around truncated words, missing vowels, quaint phrases and clunky phrasing that an author is using to represent dialect. So I was very conscious when writing ‘Glint of Light on Broken Glass’ of not packing it with dialect (or faux dialect).

The problem is this. Glint starts around 1910, at a time of great linguistic complexity in the island of Guernsey. Half the population at that time spoke a version of Norman French 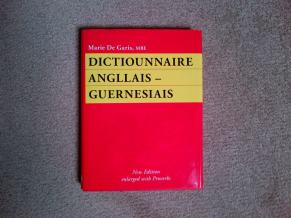 called Guernesiais. Although the island is a triangle barely 7 miles by 5, there were ‘western’ and ‘northern’ variations in pronunciation and even in choice of words. It was primarily a spoken language with no agreed grammar or spelling; although there is an authoritative Dictiounnaire Angllais-Guernesiais which I used as my guide.

Many, but not all, of these Guernesiais speakers also spoke English as that what was the schools taught after c.1906. Some, especially the older ones, also spoke ‘The Good French’, and the laws of the island were also in French. Townies in the east often forgot, or never learned, the island language as English was the language of trade. Out in the country there developed ‘Guernsey English’, a regional dialect with some speech patterns carried over from Norman.

So I have characters who speak Guernesiais more or less all the time, some who can only speak English and some who switch from one to the other even within the same conversation. The more educated have less of the ‘Guernsey English’ and in a couple of cases substitute Good French when trying to speak to the country folk. Confused?

I am writing in English, so had to represent this mish-mash of speech in English, much as if my characters were French, Germans or Ancient Greeks. The English speakers, including my female lead, are fine. I have a couple of diehard Guernesiais speakers, resisting the insidious drift to English, but I have to put their speech into English too (or only 200 people in the world would be able to read the book). To retain the flavour I have thrown in a couple of phrases where the context is clear, and a couple of dozen nouns. My two male leads speak both Guernesiais and ‘Guernsey English’, although one aims to ‘get ahead’ in life so he has started to drop the old ways. Life at a time of change is one of the underlying themes of the novel.

For the Guernsey English I had to avoid parody. I’m a Yorkshireman by birth and would never fill a Yorkshire novel with ‘Eeh bah gum!’ clichés. Instead I put just enough of the local speech patterns into the voices of the country folk to show they are not Eton-educated Englishfolk.

All this was beyond Microsoft’s grammar/spell-checker and joy to my editor! What I hope to achieve is the sense of a different time and place, one that is gone forever. The smatterings of Guernesiais in the book may also play its part in preventing the final extinction of the language.